PELECON HAS BEEN LOYAL TO ROTTERDAM THE HAGUE AIRPORT FOR AROUND 25 YEARS. WE ARE INVOLVED IN VARIOUS CONSTRUCTION PROJECTS AS A STRUCTURAL ENGINEER, FROM SMALL ALTERATIONS SUCH AS THE TERMINAL AND HANGAR BUILDINGS TO MAJOR ALTERATIONS SUCH AS THE NEW DEPARTURE HALL. RECENTLY WE WERE ALSO ALLOWED TO MODEL THE ENTIRE STRUCTURAL PART OF THE EXISTING TERMINAL BUILDING FOR SCHIPHOL, OWNER OF ROTTERDAM THE HAGUE AIRPORT. WE BUILT THIS IN COLLABORATION WITH ROYAL HASKONING DHV, WHICH MODELLED THE STRUCTURAL AND INSTALLATION ENGINEERING PART OF THE JOB.

The existing terminal building was built in the 1960s. In the period up to now, major and minor renovations have been carried out within and next to the terminal building, many of which we have worked out in 2D (autocad) or on sketch over the past 25 years. Our modellers used all this data as a basis for building the new, constructive model. A point cloud was also created, with which we could visually check the constructive model to determine whether the construction model fits! The model is built according to BIM basis ILS 2.0 with LOD300 as the elaboration level.

The building model was recently presented and delivered to the client. The building models made (constructive, architectural and installations) serve as a basis for future designs for internal and external renovations and to support the technical service Rotterdam The Hague Airport.

Recently, the new office building of Dutch women’s clothing brand Studio Anneloes in Amsterdam Osdorp was completed. Together with Heembouw Architects and contractor Heembouw offices, they took the first steps for the design after which Pelecon was quickly brought in for the constructional issue. Especially the canopy at the front of the building, but also the heart of the office where the showroom is located, needed a solid structural foundation. Especially because of the limited building height, a compact construction was chosen for the building, with small spans and integrated steel beams.

Over the past 15 years, the brand has grown into a major player on the Dutch fashion market, which created the need for its own larger premises. The new building of Studio Anneloes consists of approximately 1,600 m² of office space, 2,000 m² of warehouse and approximately 600 m² of showroom. It is situated at a visible location along the S106 on a characteristic plot near the water and is designed in such a way that further growth is possible in the future.

Structural challenge
A challenge for the constructor were the large glass surfaces in the building, which ensure a lot of daylight and a beautiful view from the workplace. In the warehouse, large glass facades and a skylight in the roof provide daylight and views, creating a pleasant working environment for warehouse workers.

Structural calculations for sustainability
The company’s sustainability philosophy is also clearly visible on both the inside and outside of the building. For example, the facades have been constructed from a timber frame and clad with Neolife (92% wood and bio-based material and 100% recyclable). The construction of the warehouse roof has been calculated in such a way that it is possible to place sufficient PV panels on it to make the building completely energy-neutral. In short: the building is like a ‘tailor-made suit’ for the company’s activities.

ALL CHILDREN AND YOUNG PEOPLE BETWEEN THE AGES OF FIVE AND SIXTEEN ARE REQUIRED TO GO TO SCHOOL. MANY YOUNG PEOPLE SEE SCHOOL AS AN ‘OBLIGATION’. AS PELECON, WE LIKE TO SHOW THAT SCHOOL AND LEARNING A TRADE IS ALSO FUN!

In short: compulsory education is worth a lot and we at Pelecon are happy to invest in it. Our main concern is the quality of future engineers in our industry!

The construction of Jan Zandbergen Group’s new food development centre in Veenendaal is in full swing. The foundation and the floor of the parking garage had already been poured, as had the basement walls, which were installed some time ago. Because Pelecon was in discussion with all parties involved from the very beginning of this assignment, we had ample influence on the supporting structure. One of the challenges was to make the parking garage as user-friendly as possible. This means that the supporting structure has to be optimal and that the column structure of the superstructure has to be adjusted accordingly.

In our advice, we suggested, among other things, designing the supporting structure as hollow-core slabs with girders, so that installations would not be impeded. Prefabricated façade elements were used for the stability of three façades, so that the floor plans can be freely arranged. During construction, Pelecon not only provided the structural design but also the detailed calculations of the steel structure and the prefabricated façade elements. 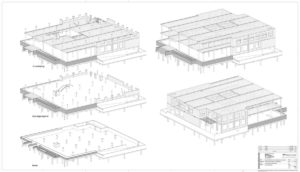 THE MODERN PRODUCTION HALL AND THE EXPANDED OFFICE AREA OF QUMEY METAALINDUSTRIE HAVE BEEN PUT INTO USE. THE BUILDING WAS DESIGNED BY MIES ARCHITECTURE AND IS COMPLETELY TAILORED TO THE WISHES OF THE STEEL PROCESSOR FROM MAARSSEN. PELECON MADE THE STRUCTURAL DESIGN FOR THIS SPLENDID BUILDING, AND QUMEY PRODUCED AND ASSEMBLED THE STEEL THEMSELVES.

The office section is constructively separated from the hall construction for reasons of fire resistance and sound transmission between the building sections. The new building is positioned next to an existing production hall of Qumey, for which a neighbouring building was purchased. In the production hall, provisions were made for nine overhead cranes over three crane tracks, one half-gantry crane and four wall cranes.

A CONTRIBUTION OF ITS OWN
There is, however, one comment to be made. When designing the new building, the architect issued a calling card in materialisation which reflects what metal industry Qumey stands for. This is exactly why they are also putting the finishing touches to their own building. The steel canopy, which will characterise the building, will be produced and installed in March. Of course, by Qumey itself.

In the January edition of the trade journal Industriebouw, an extensive article appeared on the development of the new headquarters of the Nederlandse Coöperatieve Vereniging van Makelaars en Taxateurs in onroerende goederen (NVM) at the Papendorp business park in Utrecht. A development in which Pelecon was involved as the main structural engineer.

We are proud to share this article, written by Astrid Berkhout on behalf of Industriebouw.

Years ago we were involved in the construction of the Rabobank building in Nijkerk from the former Pelecon Amersfoort (Reijneveld Engineering). Now this building is being transformed into the town hall of Nijkerk. So we know this building well and that makes the consulting process for the construction easier. For this assignment, Pelecon is working together with LSa (representation of the municipality of Nijkerk) and Van Bokhorst Architects from Nijkerk. A fine team for an inspiring project in which we, as engineers, have our role.

Changes within an existing building are always challenging. That also applies to the building of the municipality of Nijkerk, where in this case the council chamber is an important issue for us. It stands on sloping concrete columns that also guarantee the stability of the council chamber in an inventive way. In addition, the facade is completely covered with glass, so that we literally create a transparent government! The stability of the building must be adapted in such a way that this transparent facade can actually be realized. Therefore, a Senior Structural Engineer and 3D Modeler from Pelecon joined the drawing board for the design. An Advisor to Building Structures helped with the sketches for the columns, literally with a sketch roller and felt-tip pens.

Now that the City Council has agreed to the Final Design, we will quickly move on to producing specification documents and implementation drawings in 2022.

Vomar, a successful supermarket organization with 91 branches in North Holland, Flevoland, North and South Holland and Utrecht, is a good example of a rapidly growing company! The expansion of their distribution center in Alkmaar is therefore a logical step!

A selection of our activities for Vomar:
2020: Development of main distribution center totaling 40,000 m2
2006: Realization of the “cold warehouse”
2008: Installation of a floor ‘Flowers’ in the distribution center
2010: Expansion with butchery and potato-vegetable-fruit department
2016: Installation of a large number of solar panels
2020: Expansion of the bakery department

First pole
Last week Vomar celebrated the first pole for the latest expansion, namely the ‘advertising warehouse’. As a structural engineer we also worked on this project, so we congratulate Vomar with this new step!

We wish everyone a successful construction and thank you Vomar for again trusting in our cooperation!

In Veenendaal, the construction has started of the Food development center of the Jan Zandbergen Group; a European player in meat and vegetable meat substitutes. Innovative developments are normal for them. Their growing ambition and position in the market created the need for a new development location. Because of Pelecon’s long-standing relationship with the Jan Zandbergen Group, we were also involved in this project as consultants, from the design phase up to and including the detailed structural calculations.

We completed the calculation and drawing phase and in the meantime the construction has started. The foundation and the floor of the parking garage have been poured, the basement walls have been placed. The superstructure with large spans will soon offer space for presentations and developments from a modern kitchen.

We experienced the cooperation during the design phase with Van Bronkhorst Architects BNA and Dijkham Bouw from Nijkerk as pleasant and we are looking forward to a successful construction process!

That the construction of the new NVM head office in Utrecht is going fast, is proven by the photos! Last week we visited the construction site where the finishing phase is almost completed. For us as constructors, such visits are very inspiring to be involved in the project during this phase as well!

This website uses cookies to improve your experience while you navigate through the website. Out of these cookies, the cookies that are categorized as necessary are stored on your browser as they are essential for the working of basic functionalities of the website. We also use third-party cookies that help us analyze and understand how you use this website. These cookies will be stored in your browser only with your consent. You also have the option to opt-out of these cookies. But opting out of some of these cookies may have an effect on your browsing experience.
Necessary Always Enabled
Necessary cookies are absolutely essential for the website to function properly. This category only includes cookies that ensures basic functionalities and security features of the website. These cookies do not store any personal information.
Non-necessary
Any cookies that may not be particularly necessary for the website to function and is used specifically to collect user personal data via analytics, ads, other embedded contents are termed as non-necessary cookies. It is mandatory to procure user consent prior to running these cookies on your website.
SAVE & ACCEPT